Biofilm Forms on Implanted Devices Such as Pacemakers 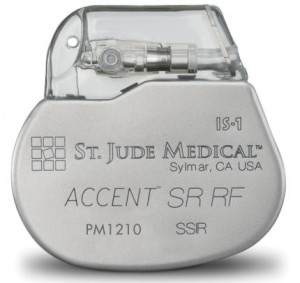 Bacteria such as Staphylococcus aureus, the ‘superbug’ behind MRSA, can be a major problem for patients who have a medical implant, such as a replacement heart valve or pacemaker.

Bacteria are able to form colonies — called biofilms — on the implanted device, which can lead to wider infections such as endocarditis, a bacterial infection of the heart.

Research led by scientists in the Department of Biology at the University of York has shed new light on how these “biofilm” structures are formed. Biofilms help the bacteria within to avoid attack from the immune system and antibiotics.

Often the only way to tackle the resulting infection is to remove the affected device, which can be a difficult and invasive process.

The team from the University of York, led by Professor Jennifer Potts, included British Heart Foundation-funded PhD student Dominika Gruszka. They found that the bacteria release long, thin protein chains to connect with other bacteria or mesh with other bacterial products. The chains have a highly unusual repetitive structure which could not have been predicted and provides important clues to how they might work.

A similar protein is found on the surface of Staphylococcus epidermidis, another bacterium commonly found in device infections.

Professor Potts, a BHF Senior Research Fellow, said: “This discovery provides an important step forward in understanding how biofilms form. It should help in the development of new ways of preventing infection of cardiac devices by these bacteria.”

“These clusters of bacteria on implanted devices can be a problem for heart patients because they are very difficult to treat with antibiotics. Often the only way to tackle the infection is to remove the affected device, which can be a difficult and invasive process and lead to further complications.

“This discovery is an important step towards improving our understanding of how these biofilms are structured, which could help lead to new treatments or new ways to prevent them forming.”

Biofilm And Bacterial Resistance To Antibiotics When Starved

Biofilm and Microbubbles – A new way to identify bacterial infections?