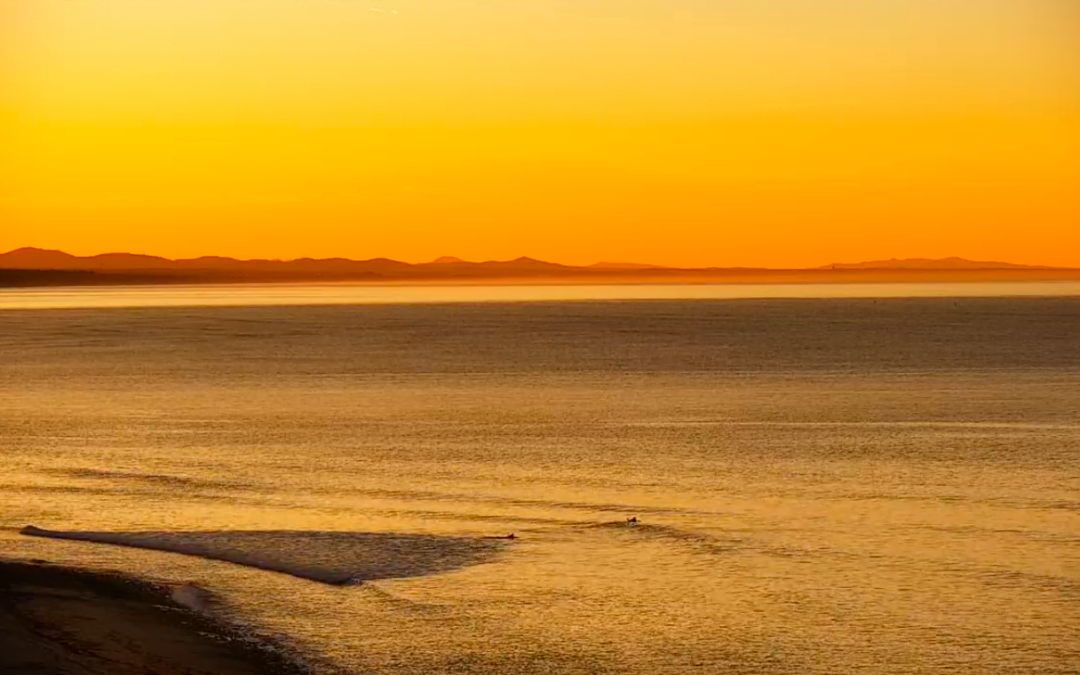 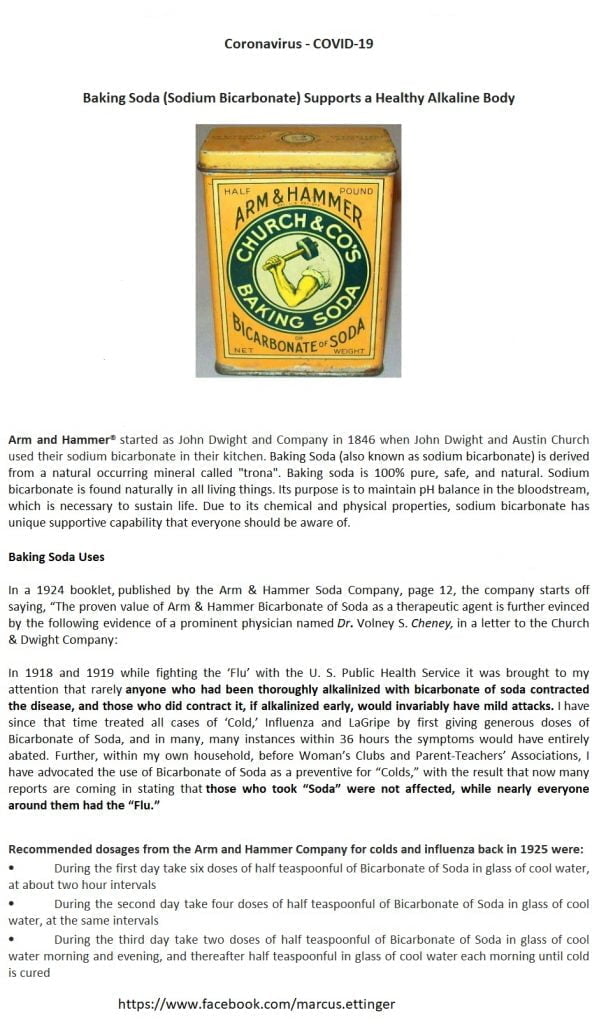 In a 1924 booklet, published by the Arm & Hammer Soda Company, page 12, the company starts off saying, “The proven value of Arm & Hammer Bicarbonate of Soda (Baking Soda) as a therapeutic agent is further evinced by the following evidence of a prominent physician named Dr. Volney S. Cheney, in a letter to the Church & Dwight Company:

In 1918 and 1919 while fighting the ‘Flu’ with the U. S. Public Health Service it was brought to my attention that rarely anyone who had been thoroughly alkalinized with bicarbonate of soda contracted the disease, and those who did contract it, if alkalinized early, would invariably have mild attacks. I have since that time treated all cases of ‘Cold,’ Influenza and LaGripe by first giving generous doses of Bicarbonate of Soda, and in many, many instances within 36 hours the symptoms would have entirely abated. Further, within my own household, before Woman’s Clubs and Parent-Teachers’ Associations, I have advocated the use of Bicarbonate of Soda as a preventive for “Colds,” with the result that now many reports are coming in stating that those who took “Soda” were not affected, while nearly everyone around them had the “Flu.”

Potassium (as bicarbonate) often acts as if it specifically caused a release of adrenal hormones (1). One authority says it is “more nearly specific than any other remedy” in influenza (2).

I personally take 1 tsp before bed, on an empty stomach, as a maintenance dose. 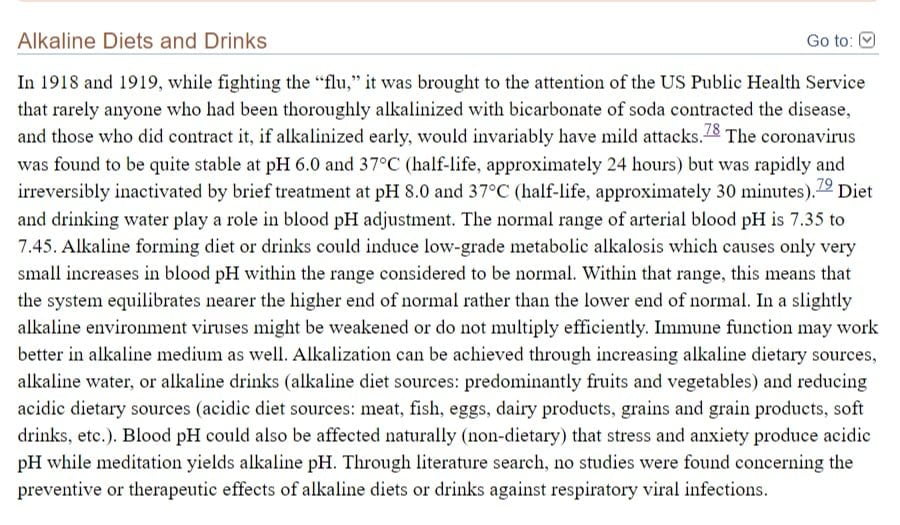 The coronavirus was found to be quite stable at pH 6.0 and 37°C (half-life, approximately 24 hours) but was rapidly and irreversibly inactivated by brief treatment at pH 8.0 and 37°C (half-life, approximately 30 minutes).79 Diet and drinking water play a role in blood pH adjustment. The normal range of arterial blood pH is 7.35 to 7.45. Alkaline forming diet or drinks could induce low-grade metabolic alkalosis which causes only very small increases in blood pH within the range considered to be normal. Within that range, this means that the system equilibrates nearer the higher end of normal rather than the lower end of normal. In a slightly alkaline environment viruses might be weakened or do not multiply efficiently. Immune function may work better in alkaline medium as well. 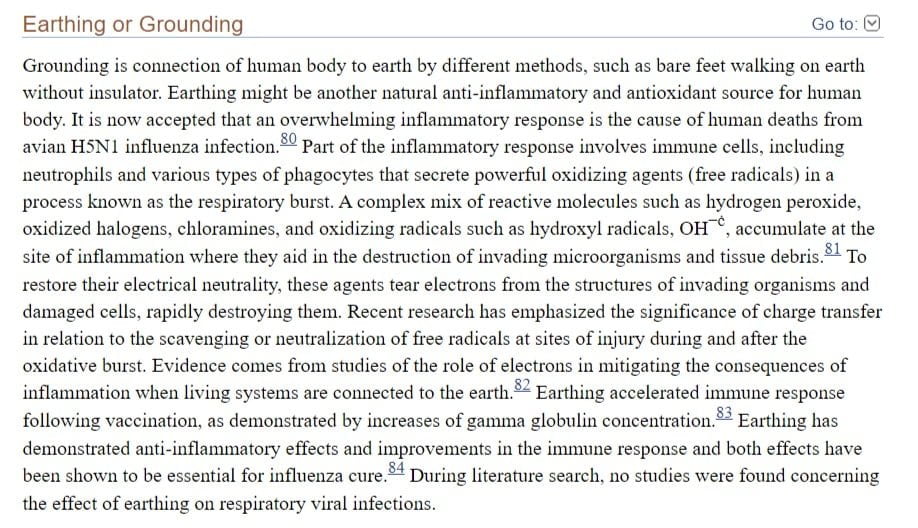 Grounding is connection of human body to earth by different methods, such as bare feet walking on earth without insulator. Earthing might be another natural anti-inflammatory and antioxidant source for human body.

Viruses can reproduce only inside cells, and they gain entry by using many of the receptors involved in immunity. Once inside the cell, viruses use the cell’s biological machinery to their own advantage, forcing the cell to make hundreds of identical copies of themselves. Although phagocytes and other components of the innate immune system can, to a limited extent, control viruses, once a virus is inside a cell the adaptive immune responses, particularly the lymphocytes, are more important for defense.[40] At the sites of viral infections, lymphocytes often vastly outnumber all the other cells of the immune system. Virus-infected cells that have been killed by lymphocytes are cleared from the body by phagocytes.[42]

It is now accepted that an overwhelming inflammatory response is the cause of human deaths from avian H5N1 influenza infection.80 Part of the inflammatory response involves immune cells,  and various phagocytese (neutrophils, monocytes, macrophages, and mast cells), that secrete powerful oxidizing agents (free radicals) in a process known as the respiratory burst. A complex mix of reactive molecules such as hydrogen peroxide, oxidized halogens, chloramines, and oxidizing radicals such as hydroxyl radicals, OH−ċ, accumulate at the site of inflammation where they aid in the destruction of invading microorganisms and tissue debris.81 To restore their electrical neutrality, these agents tear electrons from the structures of invading organisms and damaged cells, rapidly destroying them. Recent research has emphasized the significance of charge transfer in relation to the scavenging or neutralization of free radicals at sites of injury during and after the oxidative burst. Evidence comes from studies of the role of electrons in mitigating the consequences of inflammation when living systems are connected to the earth.82 Earthing accelerated immune response following vaccination, as demonstrated by increases of gamma globulin concentration.83 Earthing has demonstrated anti-inflammatory effects and improvements in the immune response and both effects have been shown to be essential for influenza cure.84 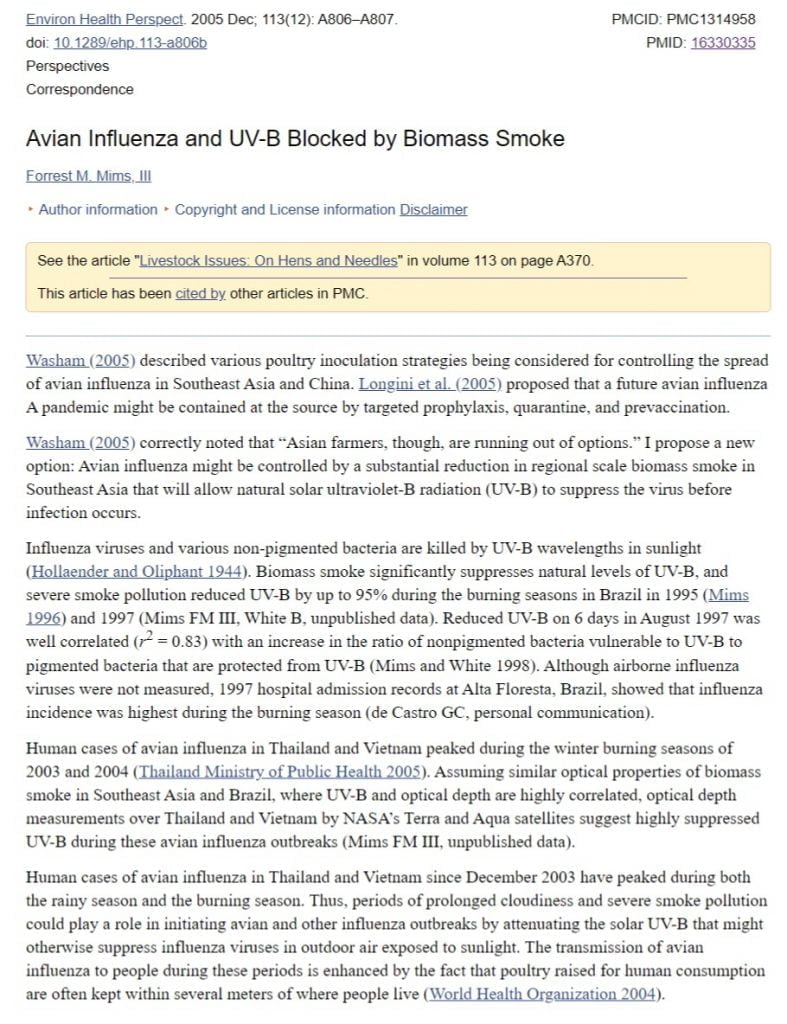 Influenza viruses and non-pigmented bacteria are killed by UV-B wavelengths in sunlight. 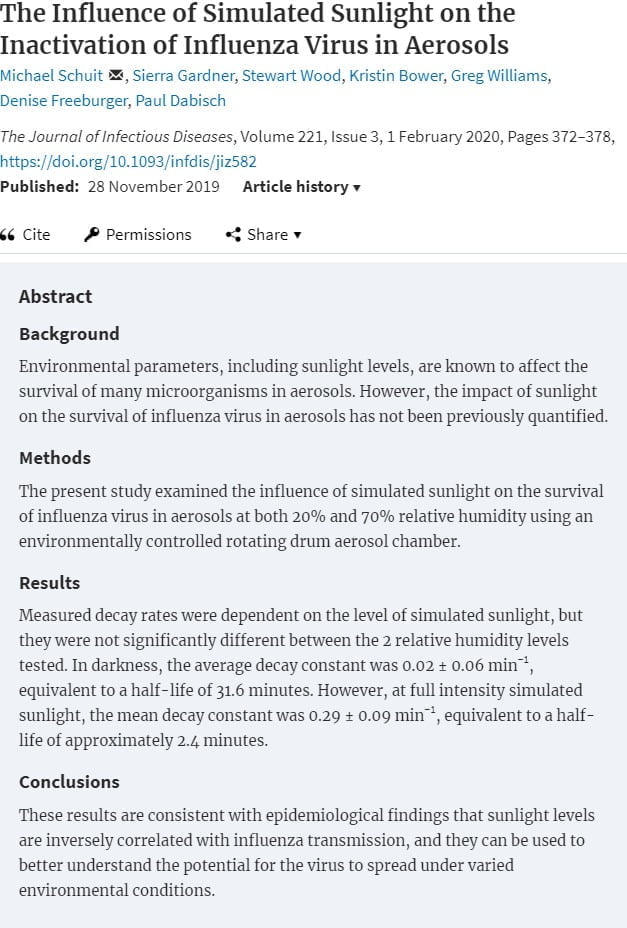 Conclusions
These results are consistent with epidemiological findings that sunlight levels are inversely correlated with influenza transmission, and they can be used to better understand the potential for the virus to spread under varied environmental conditions.

Were Equatorial Regions Less Affected by the 2009 Influenza Pandemic? The Brazilian Experience

In this study, the latitudinal gradient in pandemic-associated mortality reported was consistent even after controlling for factors previously associated with the transmissibility of the pandemic including population size, density, age structure, level of urbanization and distance from the presumed start of the pandemic. Interstate differences in mortality could have alternatively derived from economic differences, as better nutrition, health and access to nursing care could translate into lower mortality. However, the lowest burden estimates were in the low income states in the Northeast and North regions, whereas much higher mortality levels were observed in the rich states in the Southeast and South regions. The inverse association between latitude and income in Brazil in this sense speaks against the hypothesis of a prevailing role of low income towards a higher risk of pandemic-associated deaths throughout Brazil. In addition, differences in vaccination and antiviral administration cannot explain geographical differences in pandemic-associated mortality, as in Brazil mitigation efforts were coordinated at a national level and the H1N1 vaccine was distributed at the end of the second pandemic wave in 2010. Overall, our results thus suggest that the observation of a hardly burdened south and milder mortality burden nearer the equatorial region may be associated with regional differences in environmental factors that modify the transmissibility or severity of pandemic-related infections, as similarly suggested for seasonal influenza in Brazil. The notion that environmental factors, chiefly climate, may underlie the reported differences in burden is also indicated by the observation of differences in pandemic-associated mortality within the equatorial region itself, as northeastern states were in general characterized by a lower burden than the northern states. Considering that influenza epidemics tend to be associated with the rainy season in the low latitude areas of Brazil, this pattern might be related to the fact that rainy seasons in the Northern states are longer and more intense than in the Northeastern region of Brazil, where the climate is drier. 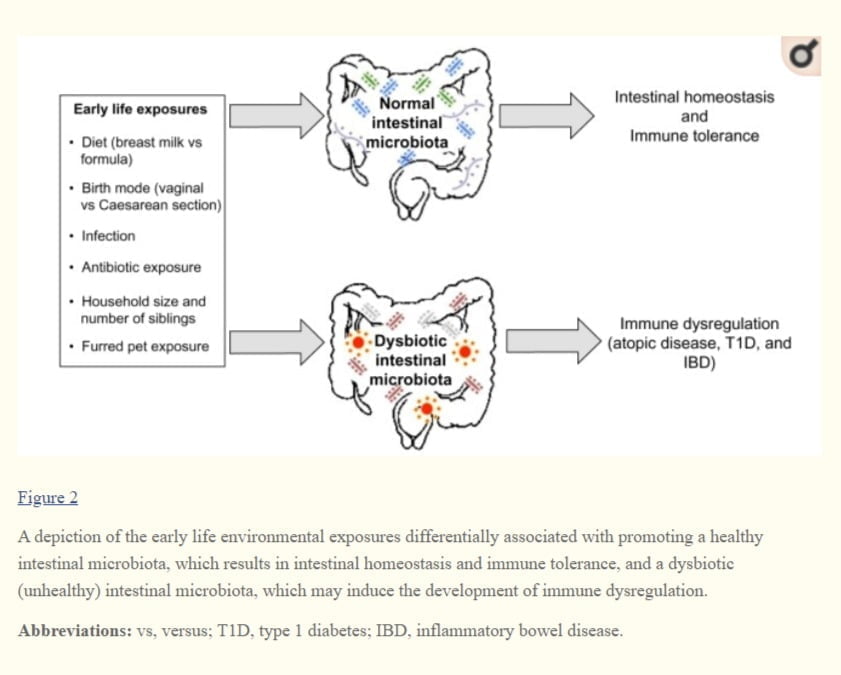