The Large Intestine – Part 5 of the 5 Phases of Digestion 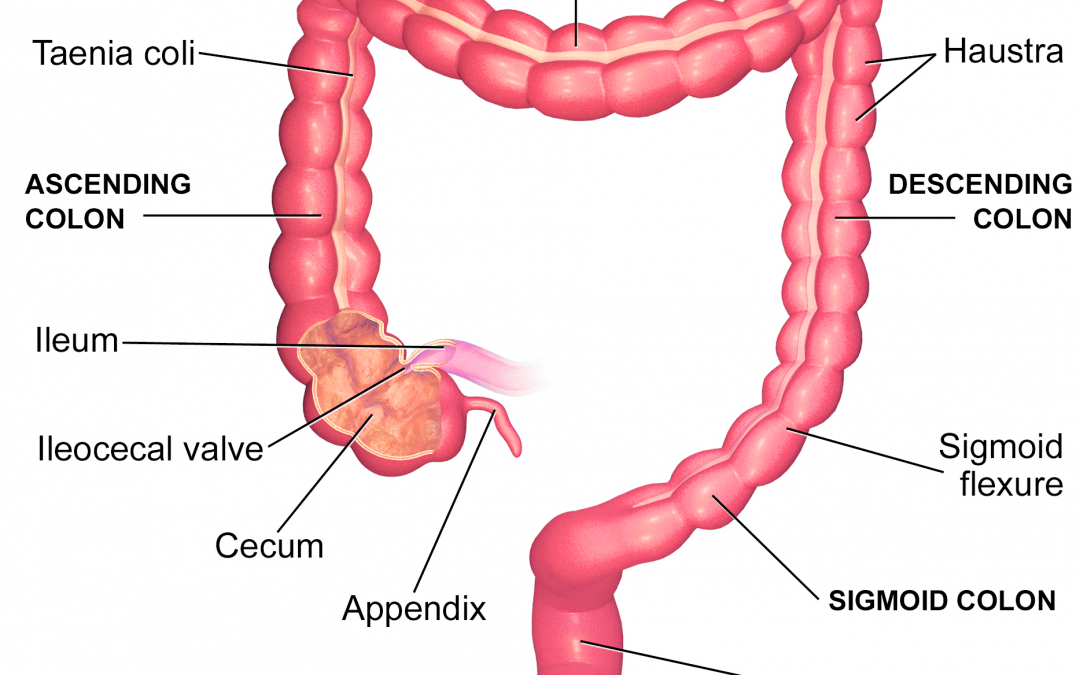 The Large Intestine, Part 5 of the 5 Phases of Digestion – The Unsung Hero

The inside lining of the large bowel is smooth, lacking the villi and microvilli found in the small intestine. This is due to the fact that almost all of the nutrients have already been absorbed in the small intestine, and are not needed. The lining of the large bowel is different from the small intestine in that there exists an abundant number of cells that do not secrete enzymes but rather mucous. The mucous is secreted in response to the digested food (chyme) passing by and when the body is in a relaxed (parasympathetic – rest/digest) state. The mucus helps protect the intestinal wall from physical irritation caused by internal and external forces. The mucus also lubricates the now dehydrated food and protects the large intestine lining from the bacterial fermentation going on inside.

Note: Normal, healthy, feces are roughly 75% water and 25% solids. 50% of fecal solids are dead bacteria (probiotics). The rest of the solid matter is made up of undigested organic matter and fiber. The characteristic brown color of feces is due to the bacterial breakdown of the bile pigment, bilirubin (red-bile). Fecal odor results from gasses produced by bacterial metabolism, including skatole, thiols, hydrogen, methane, and sulfide. Tip: If you have odor issues, go more vegetarian or at least drop-out egg whites, garlic and onions.

The large bowel performs the important job of removing water and any remaining absorbable nutrients from the chyme, while sending all indigestible matter to the rectum for elimination. Most of the movement of chyme through the large intestine is achieved by slow, rhythmic waves of accordion-like, muscular contractions called, peristalsis. This occurs over a period of several hours, but the colon can also be emptied very quickly, by stronger waves of mass peristalsis, following a large meal or when irritated.

As the chyme moves through the large bowel, 100 trillion (1014), probiotic bacteria help to digest substances in the chyme that are not digestible by the mouth, stomach or small intestine or were not digested up to this point. Amylose is one of these substances. 20-30% of starch is amylose. It has been estimated that there are more bacteria in the large intestine than there are cells in the human body. Through a process of bacterial fermentation, these bacteria convert the chyme into feces and at the same time release vitamins including vitamins K, B1 (thiamine), B2 (riboflavin), B6 (pyroxidine), B12 (cyanocobalamine), and biotin (B7). Vitamin K is almost exclusively produced by the intestinal bacteria and is essential for the proper clotting of blood. Eating dark leafy greens helps with this process. These trillions of bacteria also help to stimulate and activate our immune system as well as prevent the growth of pathogenic bacteria.

It has also been estimated that up to 10% of the body’s energy requirement is obtained through the process of bacterial fermentation in the large intestine. This fermentation process creates short-chain fatty acids (triglycerides), especially butyric acid. This process can only be maintained through a well-balanced diet, abundant in fresh fruit and vegetables. A diet such as this will ensure that the trillions of intestinal bacteria have sufficient fiber to ferment. Recent research has indicated that increased production of this short-chain fatty acid can influence satiety, the feeling of fullness, as well as having an inhibitory effect on the development of colon cancer.

Finally, the dried, condensed fecal matter is stored in the rectum until it can be eliminated from the body through the process of defecation.

There you have it, the 5 phases of digestion. For those that read the entire five-part series, you can see that it is of vital importance that we eat and digest in a stress-free environment. Without this, the digestion and assimilation of nutrients are not as efficient, movement of food through the digestive tract does not take place effectively, constipation may result, and the trillions of good bacteria will not flourish. We also need to eat a diet rich in fruit and vegetables. This will ensure that all the good bacteria have the food they need to survive, it will also increase the odds that our colon will not become diseased, as well as providing an additional fuel source for our body.

To your continued health,

I’ve been helping people get out of pain, in my office and as distance clients, for over 27 years. There is no case too complicated. This is not only my job but my hobby as well. I’m sure I feel the same level of excitement when treating a difficult case as a golfer may when getting to play Pebble Beach or Augusta National. The bottom-line is, I’m passionate about uncovering what’s going on inside your body and fixing it.