This particular product (brand) is no longer available.

December 13, 2016: I’m proud to be The United States source for Happy Gut’s Pylopass™. For those of you outside of the United States, please go to ULCERSNOMORE and order from Happy Gut. They are based in New Zealand. Pylopass is a trademark of ORGANOBALANCE GmbH. This is the newest addition to my H. pylori protocol, which I first wrote about back in 2009. Pylopass will also be an addition to my biofilm protocol, which is a must for proper support during H. pylori eradication. Pylopass is a proprietary probiotic strain, which specifically binds to H. pylori. Pylopass lowers H. pylori load as well as supports the removal of this carcinogenic stomach bacteria while keeping one’s own innate gut bacterial balance intact.

3/2018 Testimonial in which Pylopass was one of the ingredients of the protocol – Natural H. pylori Treatment Worked Even After Antibiotics Failed

Research has revealed that resistance against the most commonly used antibiotics for H.pylori treatment has increased from 10-15% in 2000 up to 40-50% in 2014 – lowering the success rate of antibiotic treatments, for H. pylori, significantly. Several clinical studies demonstrated that Pylopass reduces the colonization of H. pylori in the stomach and may prevent gastritis and peptic ulcers.

H. pylori is a difficult bacteria to eliminate due to its ability to form biofilm – bio (life) film (a collective mass of bacteria). This collective grouping of bacteria can render the body’s own immune system useless or turn it on our own tissues, an autoimmune reaction. Biofilm can degrade antibiotics and manipulate its environment. It’s a son of a bitch to treat and those who have failed one, two and even three rounds of antibiotics can attest to that fact. I’m constantly evolving both my H. pylori and biofilm protocols. Pylopass along with natural antimicrobials and a comprehensive biofilm protocol is the 1-2-3 punch that H. pylori can’t defend itself from.

PYLOPASS A Unique Mode Of Action

1. The Pylopass strain of L. reuteri was identified after a detailed, multi-year screening process. It was selected as a highly specific binding antagonist to H. pylori among more than 700 wild-type strains of Lactobacillus species of the ORGANOBALANCE culture collection of food grade strains. Through a specific mechanism, Pylopass forms coaggregates with H. pylori to decrease the overall load in the stomach, thereby supporting the elimination of H. pylori through pharmaceutical or natural methods, as well as decreasing the risk of developing gastritis and peptic ulcer disease.  Pylopass™ is comprised of a stable, spray-dried L. reuteri cells. Coaggregation is a process by which genetically distinct bacteria become attached to one another via specific molecules.

3. After coaggregation in the stomach has occurred, the entire coaggregate is excreted from the body through the digestive tract. Pylopass specifically binds to H. pylori and does not alter the microflora of the gut. 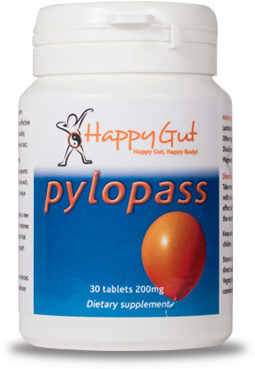 Product stability: Unlike probiotics, Pylopass™ consists of inactivated cells which can withstand environmental fluctuations. For shipment and storage, Pylopass does not require temperature controls.

Stability In The Stomach

In contrast to probiotics, Pylopass employs a mechanism which is not dependent on survival in the gastric environment. Probiotics can be beneficial because they may replace harmful bacteria in the gastrointestinal tract. However, it is uncertain whether such living probiotic strains can withstand the acidic environment in the stomach. This concern is not a challenge for Pylopass as the coaggregation depends only on the binding of surface structures between Pylopass™ and H. pylori.

Good tolerability: Triple (Prevpac) and even quadruple (Pylera) antibiotic therapies are non-specific and have numerous side effects such as diarrhea and taste disturbances. On the contrary, there are no side effects related to Pylopass™ ingestion or administration. “New studies show that Pylopass can not only reduce the colonization of Helicobacter pylori in the stomach but also improve the symptoms associated with gastritis and increase the efficacy of the pharmaceutical treatment”, said Gilles Jequier, Organobalance commercial director

“Pylopass has a unique effect against this carcinogenic stomach bacterium,” explains Christine Lang, PhD, microbiologist and managing director for Organobalance, in the launch announcement. “Unlike conventional therapies involving antibiotics which can harm the human microbiome, consumers who are taking Pylopass can lower their Helicobacter pylori load without losing their natural bacterial balance in their gut.”

No Risk Of Antibiotic Resistance

Background
Helicobacter pylori is the major cause of chronic gastritis, and considered as a risk factor for peptic ulcer and gastric cancer. The H. pylori standard antibiotic therapy fails in about 25–30% of cases, particularly because of the increasing occurrence of resistance to antibiotics. The aim of the current study was to investigate whether the strain Lactobacillus reuteri DSM17648 which has been previously shown to reduce Helicobacter pylori load additionally improves gastrointestinal symptoms in H. pylori positive subjects when used in a 28 days supplementation.

Methods
In a single-blinded, placebo-controlled study 24 H. pylori-positive adults (13 females, 11 males; median age: 43.5) with mild dyspepsia (mean GSRS score: 11.82) received placebo for 28 days followed by Pylopass™ containing the L. reuteri DSM 17648 (2 × 1010 cells per day) for the following 28 days. After 28 days of Pylopass™ supplementation the change in H. pylori load was measured by 13C urea breath test (13C-UBT) and the change in symptoms were determined by the Gastrointestinal Symptom Rating Scale (GSRS). In addition, blood assessments were conducted to measure the physiological changes relevant in terms of safety.

Results
After a 28-day supplementation phase with Pylopass™ there was a trend for reduction of H. pylori load in 62.5% of the subjects and for the overall GSRS scores in 66.7% of subjects. The overall GSRS scores from baseline to day 56 following all 24 subjects undergoing the placebo phase followed by the Pylopass™ phase was significantly decreased (p = 0.005). The mean 13C-UBT δ value decreased by 22.5% during the Pylopass™ supplementation phase (− 3.14), while the mean 13C-UBT δ increased by 37.3% (+ 3.79) in the placebo phase. No side effects were reported in either study phase.

Conclusion
The results demonstrated that L. reuteri DSM17648 has the potential to suppress H. pylori infection, and may lead to an improvement of H. pylori-associated gastrointestinal symptoms. Further studies with adequate power should be performed.