Quantum Tunneling Is Happening Around And In Us 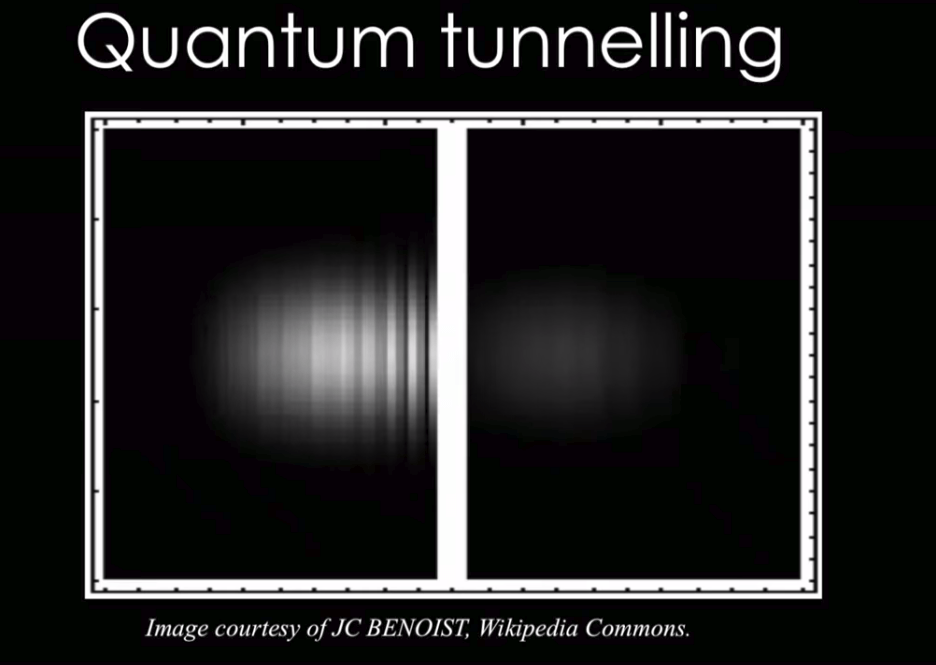 We are more than just cells. We are quantized beings. Standard biology or chemistry can’t explain the totality of who we are, what we are and how we operate. We possess electromagnetic fields, morphic fields, and quantum fields. Anything and everything, from within and from the outside could potentially affect us, or maybe not. I believe that our thoughts, emotions, and perceptions have the biggest influence on our level of resiliency – positively as well as negatively. This is followed but light, then water.

One of the most beautiful concepts in quantum biology, quantum tunneling (QT), states that if the ratio of transmission coefficient (T) is greater than the ratio of reflection coefficient (R), then a specified mass with defined kinetic energy can translocate through an impregnatable barrier.

The picture above is a representation of Quantum Tunneling (QT). Picture a photon hitting a solid wall, permeating through it, and showing up on the other side. That’s QT. Quantum tunneling suggests that a particle can hit an impenetrable barrier and somehow disappear and reappear and on the other side.

Quantum Tunneling happens all the time. It’s the reason our beautiful sun shines. Within the sun, particles fuse together and the sun turns hydrogen into helium, through the process of QT.

The speed of an enzymatic reaction, in us, is due to quantum tunneling. A proton or electron is donated hear and shows up over there, without a perceived movement of the positively charged particle.

Quantum tunneling may also be responsible or play a part in DNA mutations. If this is the case, what other mutations are caused by this quantum phenomenon? Cancer, connective tissue diseases or maybe all diseases.

Even, my favorite, human photosynthesis, experienced QT. A photon, the quantum of light, following Fermat’s principle gets quantized to optimize the most efficient way to dissociate water into hydrogen and oxygen.

Chemical reactions no longer can explain everything in biology. There are processes way beyond such reactions, and just because it may hard to comprehend or can’t be measured, now, does not mean it does not exist.

Update: (2-18-19) Neuroscientists Say They’ve Found an Entirely New Form of Neural Communication: Scientists think they’ve identified a previously unknown form of neural communication that self-propagates across brain tissue, and can leap wirelessly from neurons in one section of brain tissue to another – even if they’ve been surgically severed. The discovery offers some radical new insights about the way neurons might be talking to one another, via a mysterious process unrelated to conventionally understood mechanisms…

Medical Detective & Digestion Coach at Advanced Healing Center of Orange
If you would like a personalised solution for your health challenge, either in-office or as a distance patient, please call us at 714-639-4360 for more information.