Luca Turin, Quantum Biology and The Sense of Smell – Fact or Fiction? 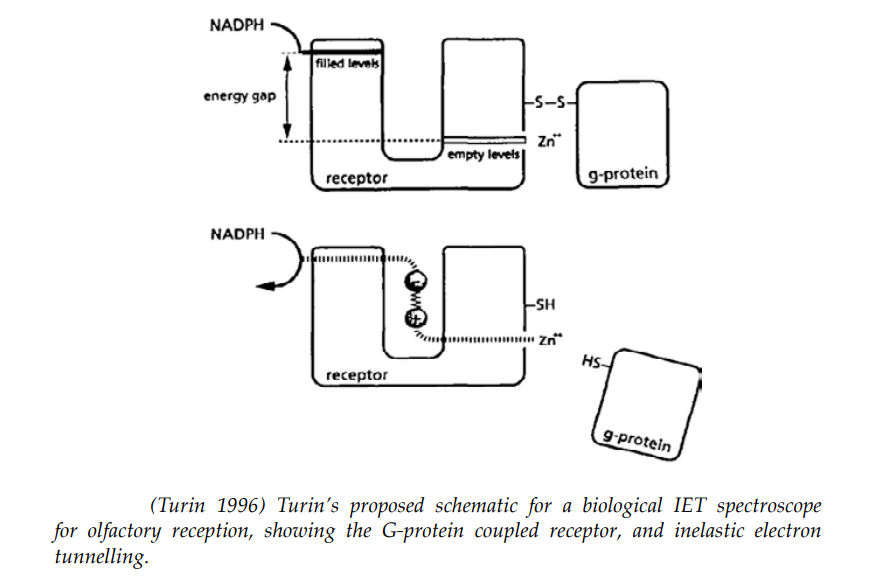 The vibrational theory of smell (olfaction) was first proposed by Malcolm Dyson in 1928. In 1996 Luca Turin, a biophysicist took it one step deeper and introduced “The quantum mechanical based theory of olfaction.” It states that our olfactory receptors respond not to the shape of the molecules but to their quantized vibrational energy. This new theory differed radically from the long-popular “shape or docking theory” put forth in 1949. In 1949, R.W. Moncrieff published an article in American Perfumer called “What is odor: a new theory,” which used Linus Pauling’s notion of shape-based molecular interactions to propose a shape-based theory of odor. Turin now provided a detailed and plausible mechanism for biological transduction of molecular vibration via quantum tunneling of electrons.

“The exact mechanism by which we recognize different scent molecules is one of the great mysteries of our physiology. While a complete explanation of our sense of smell may fall under the purview of biology, the fundamental physical phenomena that we are in fact detecting might be only explainable by quantum mechanics.” Oskar Ronan

In 2011 and 2013 Luca Turin and colleagues produced additional research papers, one on fruit fly and the other human subjects. Again, the results suggested that molecular vibrations are responsible for our sense of smell rather than the commonly held belief that a molecules’ shape is the controlling factor.

Come 2004 and Richard Axel and Linda Buck, win the Nobel Prize in physiology for mapping the genes and receptors of our sense of smell. The two discovered hundreds of genes code for the odorant sensors located in the olfactory neurons of our noses.[1] Each receptor is a protein that changes when an odor attaches to the receptor, causing an electrical signal to be sent to the brain.[2] Differences between odorant sensors mean that certain odors cause a signal to be released from a certain receptor.[2] We are then able to interpret varying signals from our receptors as specific scents.[2] Was the “shape theory” not validated as a foregone conclusion or just the most palatable of theories?

All was quiet until an odor of discontent began to fill the air. Being to outrageous for most researchers to handle, a couple of them worked hard to prove Turin’s theory false. Leslie Vosshall of The Rockefeller University published, “A psychophysical test of the vibration theory of olfaction” and Eric Block of the University at Albany tried to duplicate Turin’s research. In part, they used in vitro rather than in vivo methods as well as not using the olfactory organs. Vosshall tried to refute Turin’s theory her research was inconclusive. Block on the other hand stated that Turin’s theory was false but Turin refuted his methods. So the tit for tat began.

In conclusion, as of today, nobody has been able to unequivocally contradict Turin’s work. Personally, I believe that Turin’s theory holds water. It may not be the complete mechanism of olfaction, but I do believe it plays a role. Turin’s theory remains contested and divisive as many quantum theories are. I can appreciate how difficult it must be for a traditional biologist or physiologist to comprehend let alone embrace quantum theories. Though still not absolutely proven, biological mechanisms based on quantum mechanics are gaining more attention, legitimacy, and validation. The field of quantum biology is in its renaissance and with time the biological world, as we once knew it, will be a book that will have to be rewritten – most likely, many times.